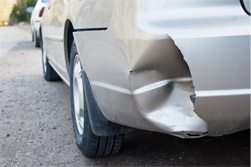 If you find yourself involved in a collision involving a motor vehicle, “fault” is probably going to come up when it comes to whose insurance is paying for repairs and other damages and who you need to speak with to make a claim. But what exactly is fault, how is it determined, and what’s the alternative?

The basic meaning of “fault” is as obvious as the question, “Whose fault is this?” If a driver shows negligence of some sort, such as texting or using a cell phone while driving, driving drunk, or otherwise not giving the road 100 percent of his or her attention, then he or she is at fault if this negligence causes the accident. It is then the responsibility of the driver at fault to pay for the damage to property and to people, and the basic kind of auto insurance pays for at-fault damages up to a certain dollar value.

In North Carolina, the minimum coverage level is $25,000 for the injuries or death of one person, $25,000 for property damage, and $60,000 overall. Auto insurance is mandatory so that drivers will always have at least this much cash available for accidents. Uninsured motorist coverage is also mandatory, and it takes effect when the at-fault driver turns out to have no insurance and not enough resources to cover medical and repair bills. Underinsured motorist coverage is also required at certain levels, since the state’s minimums aren’t always enough to cover hospital bills.

The other major kind of insurance coverage is no-fault coverage, and it pays out to the policy holder no matter what the circumstances are. This kind of coverage isn’t part of North Carolina’s mandatory auto insurance minimums, but in states like Florida you have to get $10,000 in personal injury coverage.

The “no fault” system is easier in principle since you don’t have to worry about police or insurance investigations into who is at fault before getting reimbursed by your policy, but in practice there are a few drawbacks. Florida’s auto insurance is plagued by fraud, and to combat it the state has introduced strict laws that limit reimbursements and demand the same investigations the system was trying to avoid.

So if you get into a car accident in North Carolina, try to avoid admitting that an accident is your fault even if it seems like that’s the case. You might be making a false assumption, after all, and fault is the most important factor when it comes to who will be paying out. You might also consider getting more than the state’s minimum coverage, because medical bills can get frighteningly expensive these days.